As the saying goes, don’t believe everything you read in the papers… or online!

It has been widely reported for some time that RND has been losing some of it’s historic links to the elements. However today there are rumours on social media that Royal North Devon Golf Club has lost its 7th and 8th holes to the sea. We can confirm this is NOT the case. 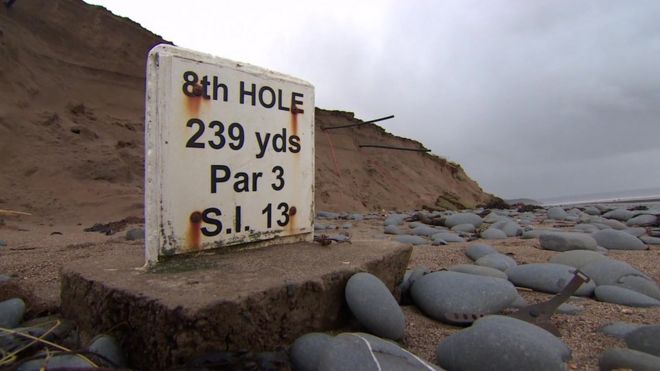 There is a picture doing the rounds of the marker post for the 8th hole lying on the beach. This is the championship marker post and whilst the hole has been shortened from the championship tees, it still plays as a par 3 along the coastline. There is however a new edition of a natural water hazard between tee and green!

Aside from the 8th’s championship tee, all other greens and tees are unaffected and in play. If you are heading (or planning to head) to North Devon this year, we advise keeping the historic club of Royal North Devon still firmly in your plans.

Whilst it looks as though England’s oldest golf club will live to fight another day, there is genuine concern over the future of this great Atlantic links and Golf Club Manager, Mark Evans, has urged the Government to intervene in the erosion issue facing the club.

We are still accepting new enquiries, however, we are experiencing exceptionally high volumes of enquiries and there may be a slight delay in receiving your requested quotes. Current wait times are 2-3 working days.

Due to unprecedented demand, summer weekend golf break availability is near capacity. Large groups are advised to consider Sunday - Thursday dates until October 2021.

We are not currently accepting golf only requests.